This lively carbonated beer looks good! (have you ever seen a beer that doesn’t look good in a TeKu?)

Another beer from The Master of Puns! It pours a cloudy, medium orange body with a large, off-white head that is pretty frothy, almost a bit fizzy. It still stays big for a very long time, and it even manages to leave some remnants on the glass. It never shrinks beyond a healthy layer.

The aroma is hoppy, malty, spicy and rather strong. It’s also pretty fruity, with notes of peach and mango. Finally I get some saison-ish yeasty notes.

Strong flavour of sweet generic fruits with faint hints of peach and mango. The spices are evident, although I can’t pinpoint any particular spice, so let’s take the easy way out and call the spicy feel “rye”. It’s actually a bit herbal as well. I also get notes that remind me vaguely funky saison yeast, but I suspect that the spices, herbs and saison yeast are all simply caused by the huge amount of rye. Finally there is a whiff of honey and alcohol in the back. The taste is light to moderate sweet and the long-lasting finish is light to moderate bitter.

It’s smooth on the palate, quite dry, mid-bodied and it has a lively carbonation.

Conclusion: Nice and easy-to-drink beer without other flaws than being no more than “nice”. But nice is good.

One of my favourite beer styles is barley wine, and I think rye often makes a good beer even better, so let’s go!

It pours a very viscous-looking, slightly hazy copper body with a tiny head that disappears fast. However, for each sip I take a new tiny layer of bubbles is produced, so in that the respect the head actually is fully lasting. Not much of the foam sticks to the glass, though.

The aroma is a bit faint with mainly sweet malty notes. There are some spices in the back, e.g. traces of anise seeds, and I also get hints of honey and a whiff of alcohol. Quite unusual for the style, I really miss the intensity and notes of e.g. sweet caramel, dried fruits and overripe fruits. This is too dull, even for a British barley wine! 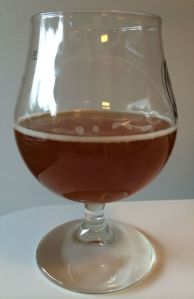 The flavour on the other hand is rather strong, as it should be in a barley wine, but unfortunately the strongest flavour is alcohol. More so, the alcohol is sharp, medicinal and solventy and not very pleasant at all. The alcohol has its upsides though, it makes the finish pleasantly warming. Other flavours include light spices (mainly anise seeds) and sweet malts, but again there’s a lack of fruitiness. The taste is moderate sweet and moderate bitter.

The Rye Wine has a fantastic creamy and smooth mouthfeel with a soft carbonation, the texture is almost syrupy and the body is definitely full.

Conclusion: a far too alcoholic and unclean beer that doesn’t have the qualities I like in a barley wine. The only thing I really appreciated with this one is the pleasant mouthfeel. My co-rater (yep, my father-in-law again) has the following conclusion: “smooth start followed by disappointment and bitter liquorice”.