This is probably the clearest homebrew I’ve ever seen! It pours a crystal clear, pale golden body with a frothy head consisting of many small bubbles. The head is white and reduces to a thin but fully lasting layer after some time. A reasonably amount of foam sticks to the glass. This looks very much like your average pilsener, but hey, it’s a crystal clear home made beer! Considering that this is a homebrew I’m tempted give this a 4 in Appearance and thereby breaking my first sacred Rule of Rating™: judge a homebrew in the exact same way as a commercial brew. But the body is a bit too pale and the head a bit too average, so I’ll end up with a 3. 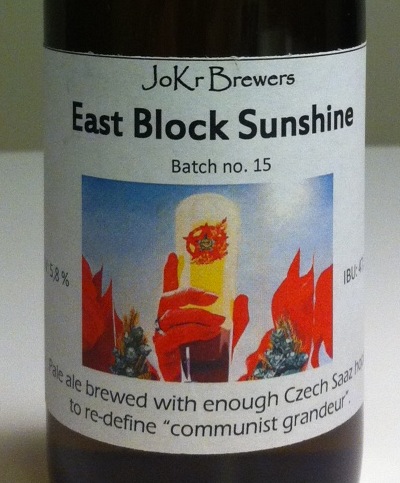 The aroma is of moderate strength, it’s quite sweet and has a faint touch of acidity. It’s not a very exciting aroma, but the Saaz hops are very obvious. Maybe a bit too obvious for an ale, this smells more like a pilsener. Nothing wrong with that per se, but I’m just not the biggest pilsener fan. I also get pale malts and some faint fruity notes.

The taste is moderate sweet, maybe a bit too sweet for such a light (both colour and ABV) beer? There is also a light acidity and the finish is moderate to light bitter. The bitterness is a bit sharp and grassy, and not that pleasant. I also get grainy notes and a light fruity touch. The body is medium, the texture is rather dry and the carbonation is a bit too soft.

In a way this beer is a bit confusing. The aroma is so full of noble hops that I was led to believe that this is a bone dry, crisp and refreshing lager-like beer, but on the palate this is just fairly dry and a bit too sweet, almost a bit cloying.

Conclusion: a strange ale, a wannabe-lager that ends up being neither.