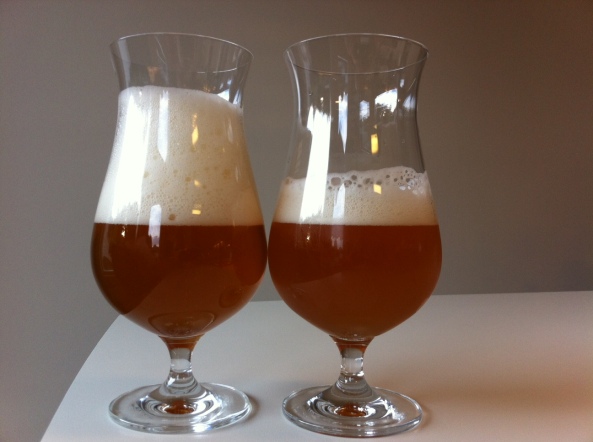 An absolutely 100% objective rating coming up, this is the rating of my very first homebrew! My Batch 001 is the Nøgne Ø Pale Ale all-grain beer-kit, which according to Nøgne should be fool proof. Guess I’m a fool, then. Please see my brewlog for details about the brewing process.

I had bought a bottle of Nøgne Ø’s own Pale Ale, and my attempt at recreating this very nice beer will mercilessly be compared to the Correct Answer™.

The colour of Batch 001 is light amber, quite similar to the original. It is however much cloudier, Nøgne Ø’s ale only has a good-looking haze. The head of my beer is smaller, has a shorter life-time and doesn’t lace the glass as well as Nøgne’s.

The aroma is… well… butter. Sweet butter and butterscotch are far too dominant, the refreshing fruits that are upfront in Nøgne’s beer are less obvious in mine. It’s not very bad, but something’s definitely gone wrong here. I suspect I bottled the beer too early (after 6 days), or could the butter be due to an infection?

The taste is moderate sweet and moderate bitter, far sweeter than Nøgne’s. There are some citric notes and grapefruit, but again the noisy butter ruins the experience. There is also a tad more obvious alcohol flavours in Batch 001 than in the real deal. 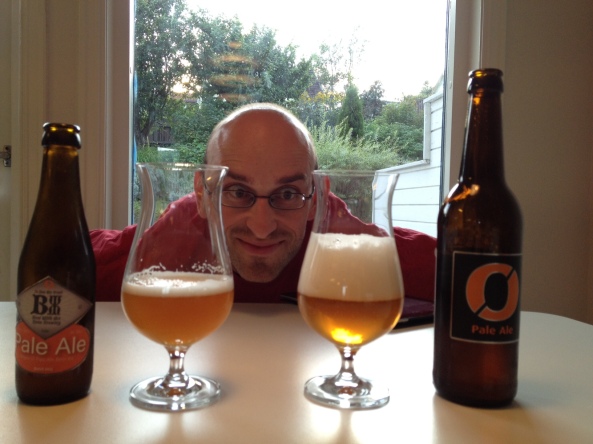 Yours truly admiring his (and Nøgne Ø's) work.

A good thing about the increased sweetness and the butter is that the mouthfeel is not that bad, I’d say a medium body and a quite oily texture. The carbonation however is a bit to soft, softer than the guys in Grimstad make.

Conclusion: I’ve actually managed to make a beer. The aroma and the taste is that of a beer. Not a good beer but it’s not entirely undrinkable. But I’ve definitely screwed up somewhere in the process.

Addendum: after a couple of more weeks in the bottles the diacetyl is almost completely gone, and the beer is now nice and refreshing. It’s still too alcoholic, but both the Aroma and Taste is so much better, I’d say they are both close to a 7. A couple of my testers actually claimed that they liked my version better than the original in a direct comparison. I’m not sure if I would go that far, but it’s still tasty stuff!